OK everydog this is the greatest story ever! And guess who it involves? I'll give you two hints: 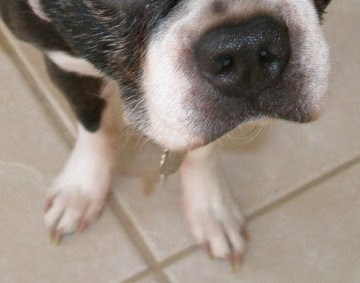 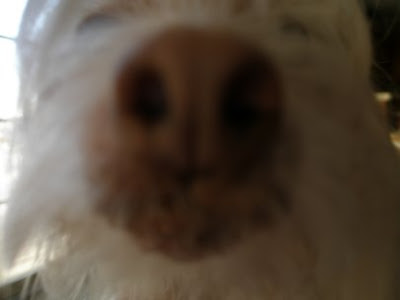 If you guessed my NIECE and NEPHEW you are RIGHT! Listen to this one!

Today Leah (who is staying with me for this week) had to run over to her apartment. While she was there she took Fig and Tad outside so they could pee and poo and bark at our new boxer puppy neighbor. Anyway, when she was ready to leave and come back to see me she put them in their crates and gave them treats and guess what Fig did? BARKED REALLY LOUD! Now mind you, this is something neither of them never ever do! But Fig was so mad at her for not letting her come see ME! So Leah let them out a little longer, figuring Fig just wanted to stay out of her crate and get more exercise. So after a bit she put them back and started to leave and guess what? Fig barked even LOUDER! And then Tad started his shrieky-howl-thing he does (which the neighbors used to complain about and which gets him in big-time trouble!). But she IGNORED them because she thought the first time she just rewarded them for their barking by letting them out. Since Tad was shrieking, though, she stood outside and waited to see if they stopped. But they got LOUDER!!!! HAHAHAHAHA! She couldn’t just leave them there and risk having people call and complain and maybe get fined, so guess who spent the afternoon with me?!?!?!???!!!! 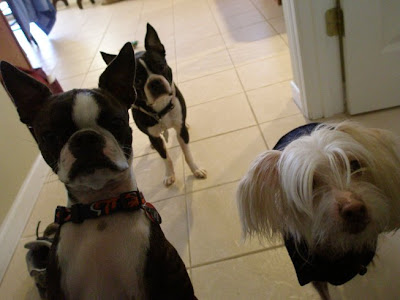 HAHAHAHAHAHA WOOOOOO HOOOOOO! Leah wasn’t very happy but WE WERE! They are soooooooo smart! Aren’t they the best?! 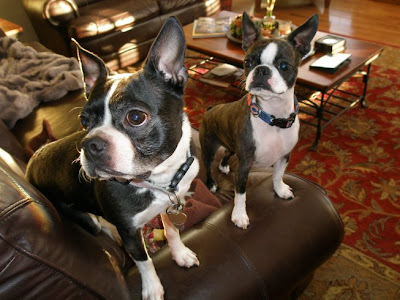 I always knew that Fig was the smartest and bestest and coolest dog in the whole world, but Tad is starting to come around, even if he does eat his own poo. 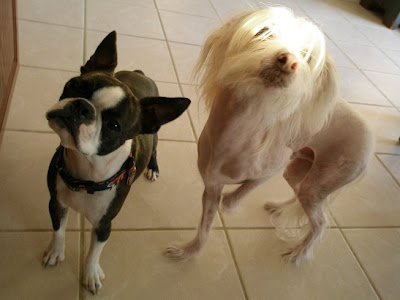 I had such a fun time but I got so tired because I usually sleep all afternoon. In fact, after they left I had dinner, then ate dessert (a celery-bone), 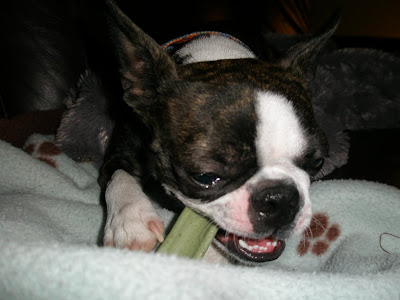 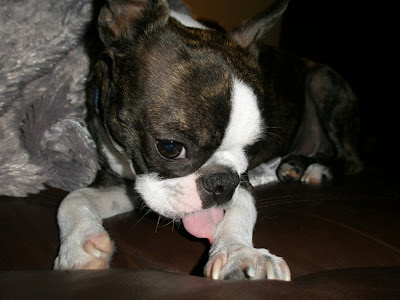 and then around 6pm I was zonked out for the entire night! 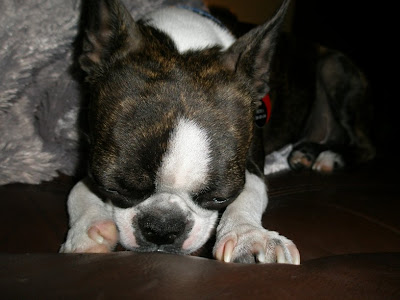 Fig RULES, and I am sure she convinced Tad to behave like that. Us Bostons are so clever!

Figgles is one stinkin' sly pupgirl, and props to Tad for following her lead!

That last photo of you is priceless, girl! You look so strung out. LOVE it.

Fig and Tad are the smartest pups out and you got to benefit hehehe.

wow. we are impressed with the smart move that fig and tad did.. hehe.. i bet they had now discovered a sure fire way of getting inside the house. :D

on a side note, i noticed that your little chinese nephew is displaying a lot of his 'nakedness' out there.. hehe..

we are so happy for you, Petra! it must be a lot of fun to have cool nephews and nieces like yours.

we got your card. thank you so much! love ya lots!

Oh Petra, us Bostons are just the smarterest!!! What a great day...and I bet Leah had fun too!!!

OMD,
How clever are they? We are thinking they are plenty clever. They should come over and play with you every day. What else would you do on a vacation?

Hi Petra!
Fig and Tad are so clever! I bet they missed you, who wouldn't!
:) Tibby

Good job Petra!! We gotta try that some time... maybe then Mom and Dad will let us go have play dates instead of sit at home in our crates alone!!!
xoxoxoxoxxo,
The Puppies

What adorable pictures! My favorite is #2 showing the alert, pointy eared, ready for action, look of the Boston Terrier! What smart dogs! Gotta admit this one takes the cake, Leah! You get top prize for being the best of the best dog sitters! See how you read their minds? Grammy

Having Fig and Tad over was a great idea! Everyone had fun and everyone was pooped at the end of the day! We hope you get to do it again tomorrow, Petra!

YOU ARE SO LUCKY THAT YOU HAD A PLAYDATE IWTH YOUR NIECE AND NEPHEW...I WISH I HAD A PLAY DATE...Buddha might come tomorrow...but still...you are three lucky pups to have each other

Hi, Petra!
Good move from Fig and Tad!
Maybe they can do it tomorrow again and you all will have lots of fun!
Take care
Kisses and hugs
Lorenza

What fun! Me's got to learn that barking trick. Maybe that would keep my pawrents home.

That's really fun. You sure have smart niece and nephew

You really are smart like every dog are!! Especially when the "last" name is terrier!! Have fun my friend!!