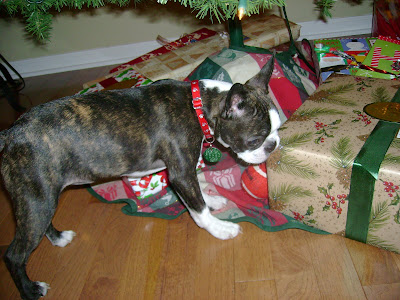 This is such a fun time of year! Presents appear like magic under our tree every day! Motch says I've been spending too much time trying to figure out how many presents are MINE, so she sat me down and we had a little chat.

"Petra, she said, "Christmas is more about giving than receiving."

So she explained. The very first Christmas present came from God. He gave Jesus to the world and that's why we sing Joy to the World and Have a Holly Jolly Christmas. But it wasn't very holly or jolly for the baby when he came. 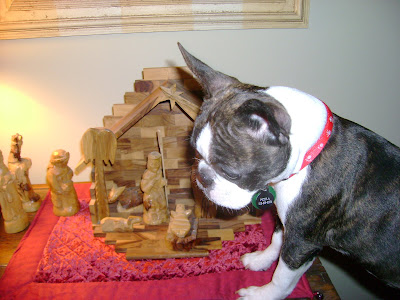 You know why? First of all, when it was time for him to be born, there was a "no vacancy" sign on the hotel, so he had to be born in a barn. But my animal friends did what you and I would have done; they gave him a place to sleep. He slept right in their feeding trough. 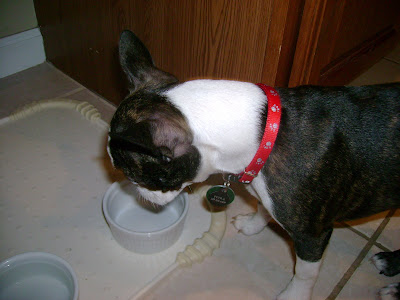 He wouldn't have fit in mine. 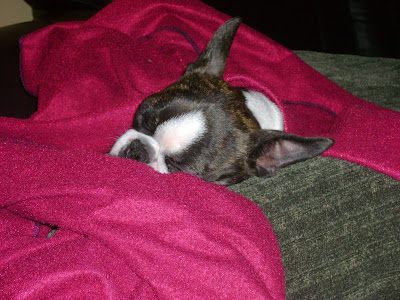 But before his mom put him in that manger, she gave him some swaddling clothes to wear. They must have felt soft and warm! 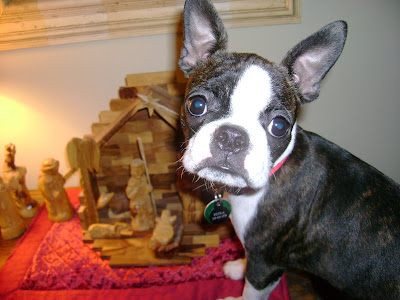 Some men who were wise found him and gave him gifts of....um, gold and frankincense and myrrh? That's stuff to eat, I hope. He was probably hungry after traveling so far to get here. 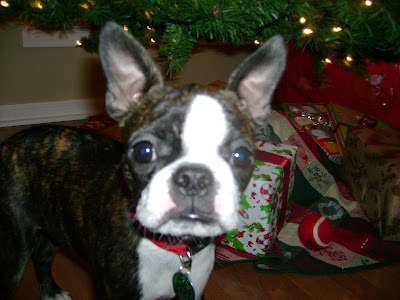 So I can see her point. There was a lot of giving going on back then. God started Christmas by giving his son and the animals gave the baby a bed and his mom gave him clothes to wear and the men from the east gave him gifts. And the giving just keeps on going. Today, Santa Paws gives presents to us and we give presents to those we love.

So now she's got me thinking...what will I give this year?
Posted by Petra at 9:52 AM

Hey Petra Pie...
That is a great story...I get it now! I think you giving licks to Motch and PA will be a great prezzie...that and your general cuteness!!!

I think what this story tells ME is that YOU need a bigger feeding bowl. What if someone stops by and needs somewhere to put their baby, time for an upgrade!!!

well, personally i think you should give me all your bones. that would be a good lesson giving, in my opinion.

Hmmm...maybe you could give Tad a chance to be your furever friend?

Hi Miss P.
Mack here. Yes, your mom knows the real meaning of Christmas. My mom says the same thing about tis better to give than to receive. I don't know what she means excatly cause I think her giving me treats and toys all the time ROCKS!

That picture of you next to the manger scene is soooo cute!

Well, stay warm and remember the reason for the season chica!
Love,
Mack

What a wonderful lesson on the true meaning of Christmas.

I'm giving my Mom the sloppiest kisses I can come up with this year. Maybe she'll give me a bully stick if they're good enough.

Petra
That is a vewy impowtant lesson fow all of us! It's about giving!!! and I'm suwe you undewstand..that's why we all asked Santa to give wawm loving homes to all ouw fuwwfwiends!
You awe a vewy good little giwl and I'm suwe you'll get lovely tweats too...
I thought you danced bootifully with youw boston pals
smoochie kisses
Asta

I'm glad somepup finally explained this whole Christmas business! You did a fine job - who better to tell the story of giving than the puppy who gives us all loads of smiles and joy??

That was a beautiful explanation that your mama gave you, Petra. So pretty much there's going to be a whole lot of people giving so all you need to do is sit back and start receiving!

You are one deep chica ~ pondering the real meaning of Christmas and you are only... how old ARE you now?

The Stellanator & I need to re-evaluate our approach to this holiday. Thanks for the heads up.

Those prezzies sure are tempting, aren't they? I get all tingly and start chasing my tail at the thought of them.

There sure was a lot of giving going on back then. You have quite a list going yourself. I'm going to have to think on it.