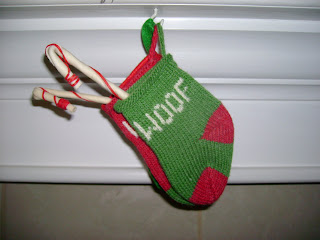 Take a look at this picture. There are 3 shorter stockings there, not 2, and ONE OF THEM IS MINE. And MINE is in front. When I saw it, I begged Motch to take it down. 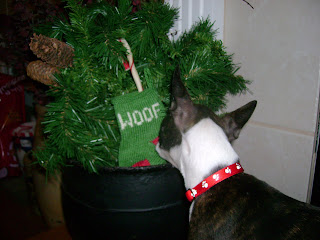 Hark the herald angels sing! There was a snackie candy cane in it and it had a red strap all the way around it! 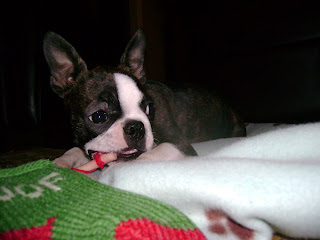 It tasted sooooooooo good! A bright colored snackie tied up in a string; this is one of my favorite things! I chewed it all night long. Before Motch knew it, I had swallowed the big long red string. She was worried that it might get stuck inside me and she might have to get a scissors to cut my poop because she called Massah & sissy Massah told her that she had to cut Fig's poop once when she ate some string. Motch braced herself to be prepared for the inevitable and hoped it would happen during the day instead of at night so it would be easier to see. 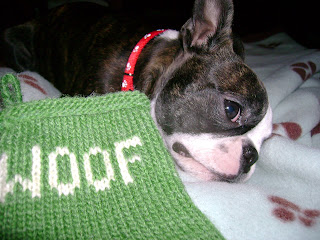 But she shouldn't have worried. I'm a tough 7 pound boston and I had a very peaceful, calm and bright night.

We are glad Motch didn't have to do any poop cutting. Oh haha that sounds funny.

Tanner, who is a COMPLETE DOOFUS, likes to eat Mom's hair...then it gets stuck and sometimes poop has to be ASSisted out of his nether regions. GROSS.

Oh Joe just makes me laugh. I had a similar situation once and had to be ASSisted. Don't worry. You'll be fine...it all comes out in the end - hee hee hee!!!

Glad your butt is ok. if the string was rawhide maybe it would just digest and come out like regular poop?
xoxo,
Ricky

Hi Petra,
I have to agree with Joey,I do the same thing too!!Only problem is that when it does not come out hand hangs out my butt,I get scared and run around like crazy!Mommy pukes and gags and gets it out!Not a pleasant experience.
I hope I have not grossed you out too much!
Frasier

ha ha ha, its fun to watch humans touching our poop. And they think they're the smart ones!!!!

Well I'm glad everything came out okay, but you really should make Motch cut your poo with a scissors at some point... it's HILARIOUS!

i still only see TWO stockings.

Hey Petra,
I always had this pleasure of watching my Mom handle my Poop. I believe it shows how much she loves me. Especially when she clears up those wet, nasty poop type. hahaa..

That looks mighty delicious..I'm glad you didn't get a tummy ache fwom it!
It was gweat to have you at my pawty. you weally do have stamina fow a baby pup, and my pawents said you wewe vewy well behaved..I hope you have a tewwific weekend
smoochie kisses
Asta

You sure have some powerful moxie and mojo (not the dogs) working for you here. I can't believe Motch took the stociing down & gave you the chewie early.

Hopefully that ribbon will come out all at once and there will be no need for poop cutting!