Ok, I repent in sackcloth and ashes for having destroyed the Christmas stocking and confess my sin for the whole world to hear. But it sure was fun anyway. 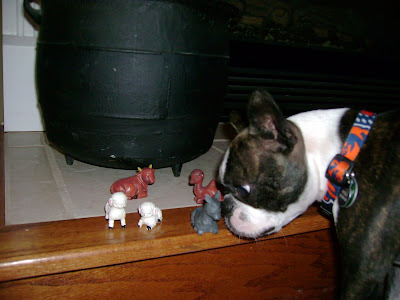 Some strange creatures have come to visit. A camel and a cow and a donkey and some sheep. 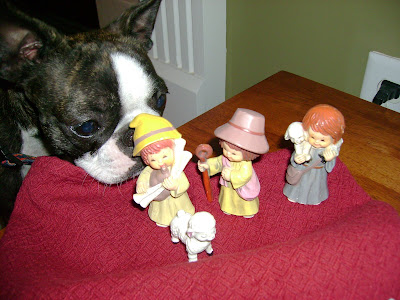 And some little shepherds made their way into my house, too. They said they lived in the fields nearby and while they were keeping watch over their flocks, an angel of the Lord appeared to them and they were terrified. But the angel told them not to be afraid because he was bringing good news of great joy for all the people. 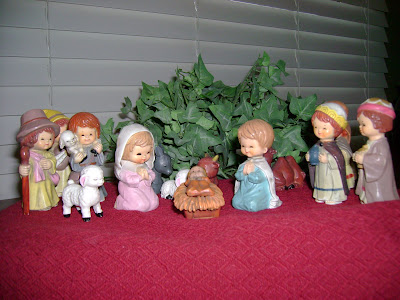 A Savior had been born in Bethlehem, so they hurried off and found him. He was lying in a manger, just like the angel said. He was wrapped in swaddling clothes, too, which means he wasn't wearing socks.
That's a good thing, because if I stole his stocking and chewed it up, I'd really be in trouble.
Posted by Petra at 10:45 AM

I see a "I really want that" look in your eyes little P!! My advice: don't do it! You will make Motch very mad.....plus Santa Claus is watching you...

Yikes! Don't do it Petra. You only have 10 more days left to be a good girl. Mack's right. Santa IS watching!

Petra
It's so nice that you got those visitows and heawd theiw stowy..I think you'we wight eating baby Jesus' socks would be a vewy big no no, hehehe
you awe a sweetie and I'm suwe Santa won't hold it against you fow not being able to wesist the chwissmuss stockings
smoochie kisses
ASTA

wow petra..it sounds like you have been watching Linus on charlie browns christmas....good times...be careful little lady...looking is nice...but touching could be dangerous

Awww thats so sweet of you to let those visitors to stay in your house. Now leave them alone!!!!! Don't eat them like you did the stocking!
Hugs & Snugs
Eduardo the Snuggle Puggle

hay,hay petra pot pie. we haff sum ov thos viziterz at owr howse tu! mom sez urz r cuter tho.
i am finkin that u bedderer leef them alon an not choo on them. cuz ur mom wood git upset. an santa iz watchin mom sez. but it iz hard tu nore sumfink lik that, iznt it? they lookz so chooabelz!
godda go muuaahh
luff
scooter

hahaha if you stole his stocking. You crack us up Petra pot pie.

What a cute nativity scene! Mom and Dad have been searching for one they like for a long time now. Mom gets creaped out easily by silly little things so it's hard to find one that isn't creepy. She's a weirdo.
Kaos

Petra, don't you dare, I can see it in your eyes, please be a good girl so Santa brings you treats. Tell Motch that Nanny loves her socks.
Hugs, bellyrubs, smoochies
Pearl
Pee-ess thanks for the address

Why do I see a disaster brewing here, just as a warning DO NOT EAT THE BABY JESUS!!

Hi, Petra!
I know you had fun with that sock!
Your visitors are beautiful! Be nice with them!
Take care
Kisses and hugs
Lorenza

I'm with JOEY! Whatever you do, DON't eat the baby Jesus.

However, if you ever ate anyone's socks, I think his would be your best bet (if he ever wore any), since HE would probably forgive you!

aw.. thanks for reminding all of us the true meaning of christmas.

although, i would agree that it is highly improbable that socks were 'in' during that time, so your'e still safe in the 'good list'.

be nice though. and try to quell the urge to chew anyone of your visitors. they all have very significant meanings esp during this time of the year

Banish that though, Petra! You want to remain on Santa's "good" list!

Chewing up stockings is like a Christmas crime or something. Uh oh.
Ike

Those look like delicious dog toys! Quick... get them before mom takes them away!

We don't hang stockings in my place. Something about me having a sock obsession. Erg. Whatever humans! I've ALWAYS known that socks were the ULTIMATE in home decor!