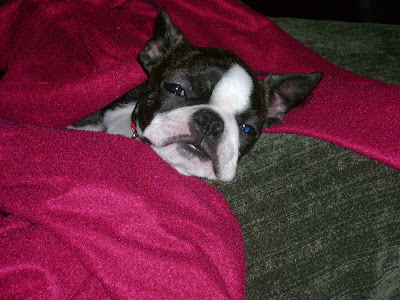 Visions of sugarplums were dancing around in my head (sigh!) when Motch woke me up to tell me I've been tagged by my friends Patches and Stella. They want me to tell you eight things about myself. So here goes.

1. My doggie mom (Roxy) and grandma both weighed just 7 pounds. I think I'll get bigger than them, though, just like my niece Figgy got much bigger than her mom Morgan.

3. When I potty outside, I do not go on the grass. I squat on the landscaping rocks but it's really hard to get my footing when ice covers the rocks. And ice has been covering the rocks A LOT lately. Then I go potty inside. Taddywack showed me how to do that but he never showed me how to hide the poo so that I wouldn't get caught. I think he eats his poo but I don't want to do that. 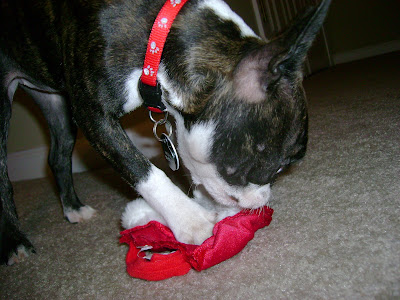 4. I love anything with straps and strings --- especially shoelaces and hoodie ties. At this time of year, though, what can be better than a Santa Paws hat strap?

5. I only eat food when Motch puts it in the palm of her hand. Yep! She really does this!

7. I was almost named Mabel, Olive, Peppercorn and many, many, many other names.

So that's it! I'm supposed to send this to 8 other friends but you've probably all been tagged before and Motch isn't very good at doing hard things like learning new things when it comes to blogging. Don't tell her I told you, but this is her 3rd try to get this post done!
Posted by Petra at 12:26 PM

Can I call you Little P too? I like it. Don't worry about the ice...we can tackle it together! I don't think I'll like ice either (I've never been in it before). I have 4 black toenails!!! only on my back paws!

Oh and SUCH a cute picture of you wrapped in your blankie!!!

I have no ideas on how to hide your poo. Hopefully someone else does. Good luck on the ice.

Yes, eating it works for me.

And I think Motch should call you Pee-Pee (for P-etra P-ie). That would be awesome.

petra is a good name since tad was PetraFied of you for a while heh. blogging takes some learning, but we are always here to help if Motch has questions!

Petra - Those were such great facts! We especially liked the one about your two chin hairs. It struck us as being really funny for some reason. You are such a doll! : )

Pee Ess: This is Wiley here...I used to only eat if I was hand-fed, too. My mom used to say that she wanted to have a porcelain hand installed in the wall near my food bowl so she wouldn't have to hand-feed me anymore, but she never actually did it. Maybe Motch will install one for you?

Hey Petra,
I think Motch is doing really well with this blogging thingy. Afterall, if she really needs help, she can ask Tad or Fig for some. :)
Are you sure you only have TWO chin hairs? How many are you supposed to have anyway?

You are stinkin' cute all wrapped up like a little Boston Burrito! Thanks for sharing all of those intimate details about your sweet self. I'll tell Stella you played the game & I bet she'll get right on over her to see ya.

Pee Ess
Watch that Tadpole. He might be able to teach you a thing or two.

You look so snuggly in your photo. HOpe you're nice & warm tonight, cuz the rain is coming your way, girlie!!

My girl started feeding me by hand too when I first came to live here. She said she did it so I wouldn't gobble all my food at once, and so I would always associate my name with good things (she says my name over & over & over while she's feeding me). She's a little crazy.

One of my almost names was Mabel too. I think some others were goober girl, Myrtle, Lucy, and I don't know what else.

Oh, Petra. Maybe someday we can play together. I would LOVE that.

I was almost Mabel too! Mom thinks that's an adoreable name. But so is Petra!

you are such a cutie, Petra definately works for you.

If Motch needs help with posting, she has so many doggie moms and dads to ask for hels, (though we doggies are the ones who really know everything) hee hee

Petra
You awe such a cutiekins..and I'm glad they chose this name I love it!!!
I've been vewy bad lately cause of the wain..it dwives me cwazy

Hi Petra,
You look like you were rudely awakened !!!
I wish myy momma would let me eat off her hands too
Frasier

Pottying inside is way better than pottying outside. And don't let anyone tell you different!

Motch is doing a really good job with the blogging! And the naming. My mom will have to consult with her when they get my new sister next summer.